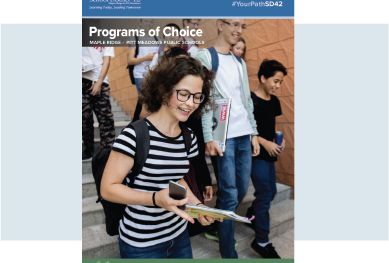 SD42 has a wide range of programs of choice, available to students across the district.
LEARN MORE
Settlement Workers in Schools (SWIS)

Research has shown that immersion is the most effective way for a child to become functionally bilingual. A second language will open more doors for your child, it will give him/her an increased appreciation of other languages and cultures, it will encourage your child to become an independent and self-disciplined learner, and it will ultimately increase his/her opportunity for employment.

The SD42 Late French Immersion Program is an excellent opportunity for students who want to learn a second language or are looking for a challenge. Students who are currently in Grade 5 are eligible to begin Late French Immersion in September at Golden Ears Elementary School. This two-year elementary program continues at Maple Ridge Secondary School.

Late French Immersion information nights occur on an annual basis in late January/early February. Dates and times are posted to the front page of the school district website (under Upcoming Events and Announcements) as they become available.

For more information about our French Immersion program, please contact Laura Brandon at 604.463.9513 or laura_brandon@sd42.ca.

At School District No.42, Early French Immersion is offered at the following four schools:

Find more information about French Immersion at Canadian Parents for French website (BC and Yukon branch).

Attachments
What is French Immersion?
Our vision
Our vision is for every individual to feel valued and for all learners to reach their potential.
Our mission
Our mission is to support all individuals in their development as successful learners, and as respectful, caring and responsible members of society.